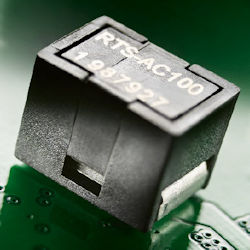 Schurter RTS thermal fuse, successfully launched in 2018, gets a new variant with a tripping temperature of >175°C. The RTS is a particularly compact overtemperature protection device for power semiconductors in SMD technology for highest demands.

Protection Against Thermal Runaway
Thermal runaway refers to the overheating of a power semiconductor due to a self-reinforcing, heat-producing process. One of the reasons is the trend towards increasing power density and miniaturization of electronic circuits. The RTS protects these power semiconductors against thermal runaway. In such an event, the thermal fuse acts as a fail-safe device and reliably interrupts the circuit from as early as 175 °C and thus addresses the operating temperatures of common power semiconductors even better.